Children Helping Children was established in October, 2001, in the aftermath of the 9/11/01 terrorist attacks that took the lives of two fathers and one grandfather of Dance Studio students. In our effort to contribute to the memory of those who were lost, Children Helping Children (CHC) was born. The Dance Studio of Park Slope students perform to help other children in need. All involved with CHC donate their time and 100% of all donations raised from each event go to the intended beneficiary. 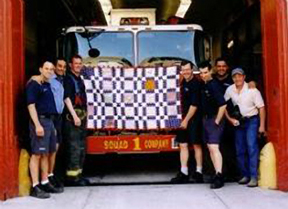 Our mission is to use performance to help other children and their families through the healing process. Through this effort we not only enrich the lives of the CHC performing students and audience, but we also honor those who were lost on September 11, 2001.

Since that tragic day, our CHC has been giving wonderful performances throughout New York City, as well as creating projects of love. In April, 2004, we presented 5 quilts to the members of the NYC Fire Department, Squad 1, Park Slope, Brooklyn, in honor of those firefighters from Squad 1 who lost their lives on September 11th. (photo, top) These quilts were created by children and friends in the Park Slope neighborhood, Pennsylvania, Tennessee and Missouri. It took more than two years to complete this project. 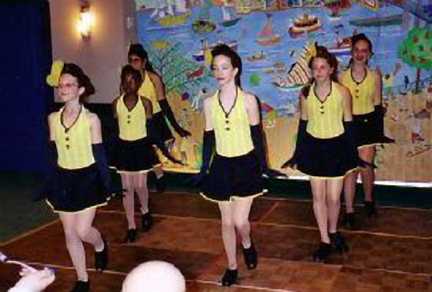 In December, 2001, the CHC put on a holiday show at Long Island University for Brooklyn area children battling cancer. The show was sponsored by The American Cancer Society.

Since the 2001 show, Children Helping Children has held raffles and given Halloween night performances to raise money for the Windows of Hope Family Relief Fund which provides aid for the families who lost loved ones on 9/11. We organized a dancewear and costume drive for students at PS 32, a Title 1 school in Brooklyn, for their newly developed arts program. 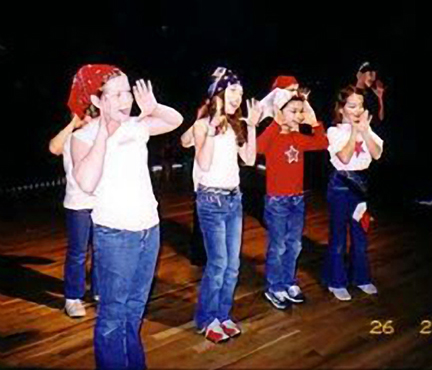 In 2003, our Halloween Event raised funds for Memorial Sloan-Kettering’s Child Life Services Division and our December Holiday Performance at The Dance Studio honored two of our own students–Megan Popkin and Lana Cohen–who have battled and are surviving cancer. On behalf of CHC, students from The Dance Studio performed tap and hip hop routines and members of the Musical Theater class sang “You’re Never Fully Dressed Without A Smile” from the show ANNIE. The event was officially proclaimed by the Brooklyn Borough President’s Office as “Children Helping Children Holiday Party Day in Brooklyn, USA.”

2003-2005 our CHC performed for the Ronald McDonald House in Manhattan. From Halloween to a visit from the CHC Santa with gifts and a lap to sit on, we hold this organization close to our hearts. Our lives have forever been enriched with the love and courage of these patients and families.

2006-2009 our “Winter Wonderland” Party and Performances along with toy collection for The Louis D. Trachtman Fund For Children have joined the community together to share in the joy of the holiday season.

CHC has continued to give The Dance Studio of Park Slope’s students the opportunity to make a difference in other’s lives.